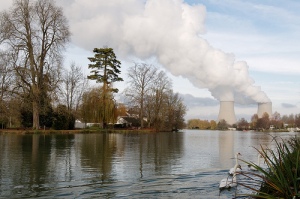 Not only were members of Greenpeace able to get past the security guarding at least one, and possibly three, nuclear facilities in France, they were able to plan and execute this operation less than a month after the plant operator, French energy giant EDF, was fined 1.5 million Euros ($2 million) for hacking into Greenpeace computers.

So, how bad is security at France’s 58 nuclear power plants? You be the judge:

Activists from environmental group Greenpeace managed to sneak into a nuclear power plant near Paris Monday in a move they said highlighted the dangers posed by France’s reliance on atomic energy.

In a statement, Greenpeace said some members had entered the nuclear site at Nogent-sur-Seine, 95 kilometers southeast of Paris, to “spread the message that there is no such thing as safe nuclear power.”

“A group of militants managed to climb on to the dome of one of the reactors, where they unfurled a banner saying ‘Safe Nuclear Power Doesn’t Exist,’” said Greenpeace spokesman Axel Renaudin.

“The aim is to show the vulnerability of French nuclear installations, and how easy it is to get to the heart of a reactor,” said Sophia Majnoni, a Greenpeace nuclear expert.

Greenpeace activists also hung banners at two other EDF plants (EDF–or Electricite de France SA–runs all of France’s nuclear power stations), but as of this writing it is not yet clear whether those banners were unfurled in- or outside of security gates.

The government of Nicolas Sarkozy has demonstrated a full-throated commitment to nuclear energy–despite popular calls in the wake of the Fukushima crisis for a reexamination of the dominant role nuclear plays in generating France’s electricity. Just last month, thousands of French protestors delayed a convoy of nuclear waste from being transported to Germany (the hazardous waste has since made it across the border). Germany’s Prime Minister Angela Merkel has signaled her country will phase out nuclear power in the next ten years.