Today, November 15, is the anniversary of this. 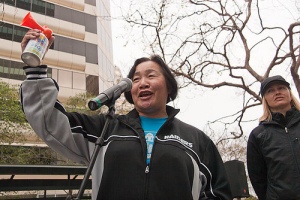 Embattled Oakland Mayor Jean Quan, speaking in an interview with the BBC (excerpted on The Takeaway radio program–audio of Quan starts at the 5:30 mark), casually mentioned that she was on a conference call with leaders of 18 US cities shortly before a wave of raids broke up Occupy Wall Street encampments across the country. “I was recently on a conference call with 18 cities across the country who had the same situation. . . .”

Mayor Quan then rambles about how she “spoke with protestors in my city” who professed an interest in “separating from anarchists,” implying that her police action was helping this somehow.

Interestingly, Quan then essentially advocates that occupiers move to private spaces, and specifically cites Zuccotti Park as an example:

In New York City, it’s interesting that the Wall Street movement is actually on a private park, so they’re not, again, in the public domain, and they’re not infringing on the public’s right to use a public park.

Many witnesses to the wave of government crackdowns on numerous #occupy encampments have been wondering aloud if the rapid succession was more than a coincidence; Jean Quan’s casual remark seems to clearly imply that it was.

Might it also be more than a coincidence that this succession of police raids started after President Obama left the US for an extended tour of the Pacific Rim?