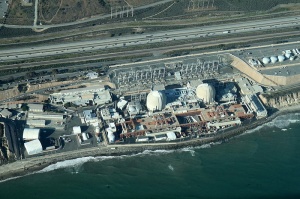 An aerial view of the San Onofre Generating Station. (photo: Jelson25 via Wikipedia)

The Nuclear Regulatory Commission released its report on recent failures at the San Onofre nuclear facility [PDF] on Thursday, stating that, as far as the government regulator was concerned, the operators of the power plant did nothing wrong when they reported major design changes as simple equipment replacement.

At issue at the San Onofre Nuclear Generating Station (SONGS) is the replacement of two giant steam generators less than two years ago. A metal heat-transfer tube in one generator ruptured in January, releasing superheated radioactive steam and triggering a shutdown. Further examination of that generator and its twin revealed unprecedented and unsettling rates of wear in hundreds of other tubes. SONGS has been completely offline ever since.

Investigation of the problem by plant operators and the NRC, as well as independent watchdogs, found that flaws in the computer modeling of the radically redesigned replacement generators lead to building and installing tubing that vibrated substantially more than was anticipated, and substantially more than the equipment could tolerate. Within 18 months of starting up the retrofitted reactors, vibration caused rapid degradation of the metal tubes, resulting in the rupture.

Still, according to the NRC, no laws were broken. Southern California Edison (a division of Edison International, the majority owner of SONGS) did not mislead regulators about the extent of the changes. Federal officials were not lax in their oversight. Things may not have gone exactly as planned, but no one on this side of the Pacific was to blame. Maybe the Japanese at Mitsubishi Heavy Industries, the folks who built the replacement parts, have some ‘splainin’ to do, but SCE and the NRC performed just like they were supposed to.

And that’s exactly the point, isn’t it?

To any outside observer (well, to any observer willing to plow through technical data and design specs), the replacement generators at San Onofre were quite obviously a major redesign–something requiring a more careful, time-consuming and, yes, costly government approval process. Mitsubishi was not the original manufacturer of the SONGS generators, and Edison was not looking to have Mitsubishi machine exact replacement parts. That would have been more expensive–much more expensive.

Instead, SCE sought out what would be the nuclear industry equivalent of “off the shelf” parts, and hoped to engineer a way to make them work with their 30-year-old reactors. Further, Edison desired to increase the output of this power plant. More power theoretically equals more profit–and, to oversimplify the technical details, more tubes could equal more power. The new generators had many times more heat-transfer tubes than the originals.

So, the major design changes at San Onofre were, to turn a phrase, very much by design. But to call them major design changes would have increased the cost, the time, and the amount of oversight required, so, as the NRC report seems to make clear, the rules are written to insure that such changes pass under the regulatory radar:

The agency staff investigation concluded that Edison “provided the NRC with all the information required under existing regulations about proposed design changes to its steam generators,” according to a statement.

But a key question remains under study: Does the agency need to change the process that was used to approve the replacement generators? At issue is whether tubing problems that eventually sidelined the reactors might have been identified by changing rules under which utilities swap equipment at nuclear power plants.

For example, the report concluded that there were “major design changes” between the original and replacement generators at San Onofre, yet they qualified as essentially identical replacements that did not require an exhaustive review by the NRC.

The “letter is willing but the spirit is weak” tone of the San Onofre report seems especially poignant/disturbing coming, as it does, within a fortnight of the latest Japanese report on the Fukushima disaster. That lengthy study found that government officials colluded with the nuclear industry to avoid upgrades and evade scrutiny, resulting in a severe undermining of public safety. Summaries of that report focused on aspects described as unique to Japanese culture, but the NRC’s San Onofre findings demonstrate that this well-choreographed dance between industry and regulators crosses cultural and national boundaries.

The SONGS report also comes the same week as a party thrown by supporters of the recently deposed NRC chairman, Gregory Jaczko:

A cadre of veterans from the office of Senate Majority Leader Harry Reid (D-Nev.) are organizing an effort to pay down the legal debts taken on by Gregory Jaczko, the former chairman of the Nuclear Regulatory Commission, who stepped down amid a fierce industry-backed assault.

Jaczko, a former Reid staffer, racked up tens of thousands in legal fees defending himself. The thinking behind the fundraising effort is straightforward: High-level staffers for top senators can command high salaries in the private sector, many times more than can be earned in public service. So former Reid staffers who have spent their post-Senate years in more lucrative pursuits are coming to the aid of a colleague who made a different, and quite costly, decision.

Jaczko’s former colleagues will gather Tuesday evening with Reid and Rep. Ed Markey (D-Mass.), another former boss of his, to thank him for his time on the nuclear panel. (No fundraising can legally take place while Reid and Markey are at the event, organizers said.)

The industry’s two top representatives, Alex Flint and Marvin Fertel of the Nuclear Energy Institute, are planning to attend the event, said Karen Wayland, a former Reid staffer who, along with [another former Reid aid Susan] McCue, spearheaded the effort.

Since the writing of that story, the event took place and Senator Reid’s Searchlight Foundation has made known its intention to donate $10,000 to Jaczko’s defense fund.

To be clear, what happened to Jaczko, who was forced out after he advocated for modest safety improvements at US nuclear plants and coordinated with the Department of Energy to end work on the Yucca Mountain nuclear waste project, is itself a lesson in regulatory capture. The US nuclear industry sees any new safety requirements as a threat to their bottom line, and it desperately needs the federal government to find a storage solution for their vast piles of highly radioactive spent fuel and related waste–and so Jaczko was purged and a message was sent.

But, as the guest list would tell you, it is hard to call anyone in this crowd a pure hero. When key figures behind your ouster are also guests at your farewell party and fundraiser, you have to ask yourself if you were really that tough–and everyone around you has to see that industry and government are too cozy.

Close is not good

The phrase quickly devolved, however, into its sarcastic opposite–defense contracting will have that effect–and now “close enough for government work” means barely acceptable.

And government–at least when it comes to agencies like the Nuclear Regulatory Commission–has sought to live up to that new understanding ever since.

But when it comes to nuclear power, with the ominous safety implications of substandard work and lax oversight, close enough is not good enough. And if government and industry “working closely” on a problem means what it seems to have at San Onofre, then “close” pretty much never means “good.”