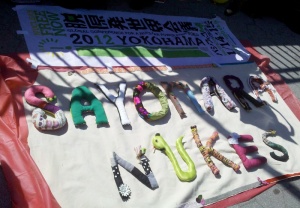 Nearly a week after the first anniversary of the Japanese earthquake and tsunami that started the crisis at the Fukushima Daiichi nuclear power facility, I am still sorting through the dozens of reports, retrospectives and essays commemorating the event. The sheer volume of material has been a little exhausting, but that is, of course, compounded by the weight of the subject. From reviewing the horrors of a year ago–now even more horrific, thanks to many new revelations about the disaster–to contemplating what lies ahead for residents of Japan and, indeed, the world, it is hard just to read about it; living it–then, now, and in the future–is almost impossible for me to fathom.

But while living with the aftermath might be hard to imagine, that such a catastrophe could and likely would happen was not. In fact, if there is a theme (beyond the suffering of the Japanese people) that runs through all the Fukushima look-backs, it is the predictability–the mountains of evidence that said Japan’s nuclear plants were vulnerable, and if nothing were done, a disaster (like the one we have today) should be expected.

I touched on this last week in my own anniversary examination, and now I see that Dawn Stover, contributing editor at The Bulletin of the Atomic Scientists, draws a similar comparison:

Although many politicians have characterized 3/11 and 9/11 as bizarre, near-impossible events that could not have been foreseen, in both cases there were clear but unheeded warnings. . . . In the case of 3/11, the nuclear plant’s operators ignored scientific studies showing that the risks of a tsunami had been dramatically underestimated. Japan’s “safety culture,” which asserted that accidents were impossible, prevented regulators from taking a hard look at whether emergency safety systems would function properly in a tsunami-caused station blackout.

Stover goes on to explain many points where the two nightmare narratives run parallel. She notes how while governments often restrict information, stating that they need to guard against mass panic, it is actually the officials who are revealed to be in disarray. By contrast, in both cases, first responders behaved rationally and professionally, putting themselves at great risk in attempts to save others.

In both cases, communication–or, rather, the terrible lack of it–between sectors of government and between officials and responders exacerbated the crisis and put more lives at risk.

And with both 9/11 and 3/11, the public’s trust in government was shaken. And that crisis of trust was made worse by officials obscuring the facts and covering their tracks to save their own reputations.

But perhaps with that last point, it is more my reading my observations into hers than a straight retelling of Stover. Indeed, it is sad to note that Stover concludes her Fukushima think piece with a similar brand of CYA hogwash:

By focusing needed attention on threats to our existence, 3/11 and 9/11 have brought about some positive changes. The nuclear disaster in Japan has alerted nuclear regulators and operators around the world to the vulnerabilities of nuclear power plant cooling systems and will inevitably lead to better standards for safety and siting — and perhaps even lend a new urgency to the problem of spent fuel. Likewise, 9/11 resulted in new security measures and intelligence reforms that have thus far prevented another major terrorist attack in the United States and have created additional safeguards for nuclear materials.

When it comes to post-9/11 “security” and “intelligence reforms,” Stover is clearly out of her depth, and using the Bush-Cheney “no new attacks” fallacy frankly undermines the credibility of the entire essay. But I reference it here because it sets up a more important point.

If only Stover had taken a lesson from her own story. The Fukushima disaster has not alerted nuclear regulators and operators to vulnerabilities–as has been made clear here and in several of the post-Fukushima reports, those vulnerabilities were all well known, and known well in advance of 3/11/11.

But even if this were some great and grand revelation, some signal moment, some clarion call, what in the annals of nuclear power makes Stover or any other commentator think that call will be heard? “Inevitably lead to better standards”–inevitably? We’d all exit laughing if we weren’t running for our lives.

Look no further than the “coincidental” late-Friday, pre-anniversary news dump from the US Nuclear Regulatory Commission.

Late on March 9, 2012, two days before the earthquake and tsunami would be a year in the rear-view mirror, the NRC put on a big splashy show. . . uh, strike that. . . released a weirdly underplayed written announcement that the commission had approved a set of new rules drawing on lessons learned from the Fukushima crisis:

The orders require U.S. nuclear plants to install or improve venting systems to limit core damage in a serious accident and to install sophisticated equipment to monitor water levels in pools of spent nuclear fuel.

The plants also must improve protection of safety equipment installed after the 2001 terrorist attacks and make sure it can handle damage to multiple reactors at the same time.

It didn’t take long to discover these were not the rules you were looking for.

First off, these are only some of the recommendations put before the commission by their Near-Term Task Force some ten months ago, and while better monitoring of water levels in spent fuel pools and plans to handle multiple disasters are good ideas, it has been noted that the focus on hardening the vents in Mark I and Mark II boiling water reactors actually misdiagnoses what really went wrong in two of the Fukushima Daiichi reactors.

Also, it should be noted this represents less than half the recommendations in last summer’s report. It also does not mandate a migration of spent fuel from pools to dry casks, an additional precaution not explicitly in the report, but stressed by NRC chief Gregory Jaczko, as well as many industry watchdogs.

But most important–and glaring–of all, the language under which these rules passed could make it that almost none of them are ever enforced.

This is a little technical, so let me turn to one of the few members of Congress that actually spends time worrying about this, Rep. Ed Markey (D MA-7):

While I am encouraged that the Commission supports moving forward with three of the most straightforward and quickly-issued nuclear safety Orders recommended by their own expert staff, I am disappointed that several Commissioners once again have rejected the regulatory justification that they are necessary for the adequate protection of nuclear reactors in this country. . . .

After the terrorist attacks of September 11, 2001, the NRC determined that some nuclear security upgrades were required to be implemented for the “adequate protection” of all U.S. nuclear reactors. This meant that nuclear reactors would not be considered to be sufficiently secure without these new measures, and that an additional cost-benefit “backfit” analysis would not be required to justify their implementation. The “adequate protection” concept is derived from the Atomic Energy Act of 1954, and is reflected in NRC’s “Backfit Rule” which specifies that new regulations for existing nuclear reactors are not required to include this extra cost-benefit “backfit” analysis when the new regulations are “necessary to ensure that the facility provides adequate protection to the health and safety of the public.”

Both the NRC Fukushima Task Force and the NRC staff who reviewed the Task Force report concluded that the new post-Fukushima safety recommendations, including the Orders issued today, were also necessary for the “adequate protection” of existing U.S. nuclear power plants, and that additional cost-benefit analysis should not be required to justify their implementation.

While Chairman Jaczko’s vote re-affirmed his support of all the Near-Term Task Force’s recommendations, including the need to mandate them all on the basis that they are necessary for the adequate protection of all U.S. nuclear power plants, Commissioner Svinicki did not do so for any of the Orders, Commissioner Magwood did not do so for two of the three Orders, and Commissioners Apostolakis and Ostendorff rejected that basis for one of the three. As a result, the Order requiring technologies to monitor conditions in spent nuclear fuel pools during emergencies will proceed using a different regulatory basis. More importantly, the inability of the Commission to unanimously accept its own staff’s recommendations on these most straightforward safety measures presents an ominous signal of the manner in which the more complicated next sets of safety measures will be considered.

In other words, last Friday’s move was regulatory kabuki. By failing to use the strictest language for fuel pools, plant operators will be allowed to delay compliance for years, if not completely excuse themselves from it, based on the argument that the safety upgrade is too costly.

The other two rules are also on shaky ground, as it were. And even if by some miracle, the industry chose not to fight them, and the four uber-pro-nuclear commissioners didn’t throw up additional roadblocks, nothing is required of the nuclear facilities until December 31, 2016.

So, rather than it being a salutary moment, a tribute of sorts to the victims in Japan on the anniversary of their disaster, the announcement by the NRC stands more as an insult. It’s as if the US government is saying, “Sure, there are lessons to be learned here, but the profits of private energy conglomerates are more important than any citizen’s quaint notions of health and safety. ”

As if any more examples were needed, these RINOs (rules in name only) demonstrate again that in America, as in Japan, the government is too close to the nuclear industry it is supposed to police.

And, for the bigger picture, as if any more examples were needed, be it before or after March 11, it really hasn’t been that hard to imagine the unimaginable. When an industry argues it has to forgo a margin of safety because of cost, there’s a good chance it was too dangerous and too expensive to begin with.

By way of contrast, take a look in at the some of the heartfelt expressions of commemoration and protest from New York’s Fukushima memorial and anti-nuclear rally, held last Sunday in Union Square Park.